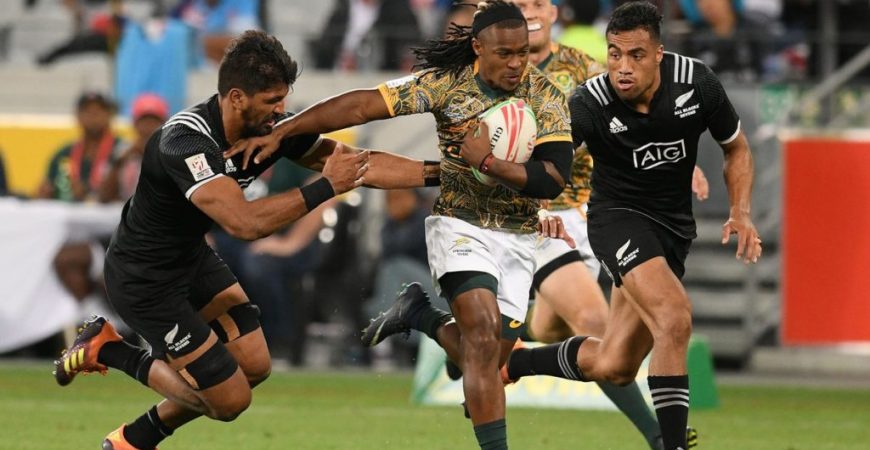 Hacjivah Dayimani joined the Blitzboks training camp on Monday as they continue their preparations for the upcoming 2019-20 Sevens season.

The 21-year-old Lions star was joined by Blitzboks regulars Muller du Plessis and Angelo Davids, while there were returns to the camp for Seabelo Senatla, Ruhan Nel, Dylan Sage and Rosko Specman, who were all involved in Vodacom Super Rugby and Currie Cup action.

Dayimani last played sevens for the South African U18 team that won gold at the Commonwealth Youth Games in Samoa in 2015, and he hopes to be part of the squad to contest the opening tournaments of the new series in Dubai and Cape Town in December.

‘I came here for two reasons,’ Dayimani said. ‘The first is to improve as a rugby player and I believe adding the skills required to play sevens will make me a better 15s player as well.

‘The thing about sevens I love is the one-on-one contests. In 15s you can make a mistake and get away with it or someone can cover for you, but sevens is brutal in that regard. If you miss a tackle, you leave a gap. I also love the space the game offers.’

The first day back in camp was spent with medicals and other testing, but Dayimani said he already felt very welcome.

‘I am the new guy here, but everyone immediately made me feel welcome. They treated me as if I have been here 10 years and that is awesome. I am very keen to be part of this group.’

The Blitzboks start their pre-season preparations by taking part in the Oktoberfest Sevens tournament in Munich this weekend. The team to travel to Germany has been forced into a late change after Ryan Oosthuizen was withdrawn due to a back strain. He will be replaced by Sako Makata.

Contact us on +27 (0)82 466 4122 or email bookings@belugahospitality.co.za to book your hospitality packages in one our VIP hospitality facilities.