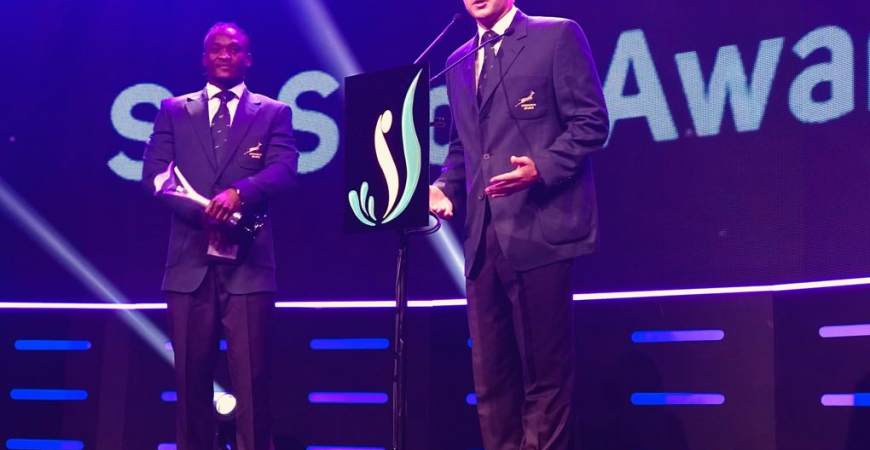 The Springbok Sevens team was named South African Sports Team of the Year at the annual SA Sports Awards in Johannesburg on Sunday evening.

SA Rugby president Mark Alexander congratulated them by saying: “The Blitzboks have not only captured the very competitive HSBC World Rugby Sevens Series crown in 2016/17, they also captured the hearts and minds of all South African sports lovers with their success, so this award just rewards to them. It is a fantastic achievement, not only for SA Rugby, but also for the country. The Blitzboks showed what teamwork is all about, they showed what passion is all about and they showed that a South African sports team can be the best in the world. I would like to thank and congratulate coach Neil Powell and his management team, and also the players for this.”

Springbok Sevens captain Philip Snyman and the Blitzboks’ leading try-scorer of all time, Seabelo Senatla, received the award on behalf of the team. “We are very proud South Africans right now,” Snyman said.“The acknowledgment is a huge honour for the team. We represent and play for all South Africans, so to be recognised in such a way really means a lot. We are about to start the next series and this will motivate us even more to retain our series title.” The HSBC World Rugby Sevens Series for 2017/18 kicks off in Dubai on 1 December, with the HSBC Cape Town Sevens a week later on 9 and 10 December.

Come see the Blitzbokke defend their HSBC Sevens title at Cape Town Stadium in our VIP hospitality facility. Get in touch now to secure your premium Sevens rugby hospitality experience.